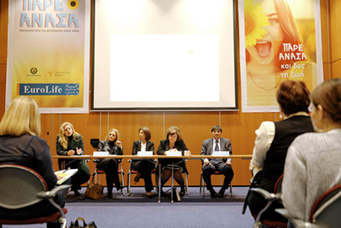 On Tuesday, March 1, a press conference was held at the EuroLife head office to announce measures against smoking among young people.

The conference was prefaced by EuroLife’s General Manager Ms. Artemis Pantelidou, who highlighted the importance that EuroLife places on such special actions revolving around health and the quality of life of young people in our society.

Following the introduction there was a short address by the General Manager of the Ministry of Education and Culture, Ms. Pantelaki, and by Dr. Katsaounou, Assistant Professor of Respiratory Medicine at the University of Athens.

Later, Dr. Soteriades gave a presentation and briefly explained the findings of a survey on smoking among adolescents in Cyprus, with reference to the high smoking rates among friends. Furthermore, he presented the actions that were initiated and are being implemented in schools this week.

You will be directed to a new page